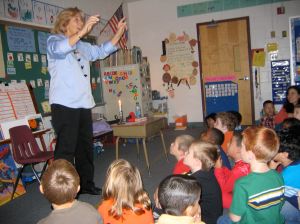 I started thinking the other day about how much has been written lately about getting kids to use their strategies as they read.  We want them to use these strategies to make sense of text and to help them get unstuck when they get stuck.  In one 5th grade class, the teacher and I have been talking about, modeling, and doing shared demonstrations with the kids since September on all kinds of useful strategies, but I decided to come at it from a different angle.  I wanted them to feel how natural and automatic their strategies came into play when the text was something that was extremely easy.  So the day before Thanksgiving I did some storytelling for the class (now don’t stop reading because you are NOT a storyteller; you can do this same lesson with a read aloud book.)

I storytold the folktale “Tinderbox” first.  After the kids did a quick turn and talk about what they liked about the story, we looked at a chart with pre-written words — visualizing, predicting, making connections, questioning, inferring (and under inferring it said, “characters, underlying ideas, word meanings.”)  As we talked about each one, the kids had so much to say. I was amazed!  There was no “pulling teeth” to keep this discussion going. Here are a few snippets from that conversation:

Pat: When I was telling this tale I had no book or props in front of me.  Did you get any pictures in your mind?  What mental image was clear to you during the telling?

The 5th graders described in great detail the chamber with three doors, the enormous dogs sitting on top of each sea chest, the witch sitting by the large oak tree, and many more scenes.

As we discussed predicting, almost every student said they predicted that the third sea chest would contain gold.  Following that, other kids shared ideas of when their predictions didn’t come true.  One student said, “I thought sure the witch was going to kill the soldier when he wouldn’t give up the tinderbox, but I was surprised that she was the one who burst into 1,000 pieces.”  Another said, “when you said the princess was locked in a tower, I thought this story was going to turn into Rapunzel, but it didn’t.”  It was easy to lead the discussion into the idea that sometimes we need to rearrange our predictions as we get more information.  The discussion continued with connections to other books and questions or wonderings the students had during and after the story.

My favorite part of the discussion came when the kids realized how easy it was to infer word meanings when they were totally engaged in the story.  I asked them to figure out what it meant when I told about the witch having a hard time pulling up the soldier with the rope “because he was so laden down with all that gold.”  Though that’s certainly not a word they use, they quickly figured out what it meant.  Several students were also able to come up with a word that described the main character of the soldier (another way to infer) — greedy, clever, self-centered, careless with money — and gave evidence from the story to back up their idea.

Pat:  We also said that inferring had a lot to do with reading deeply and trying to “see more.”  Did you get any idea about how women were treated back in these medieval times?

Serena: Not so great.  That princess didn’t get to decide who she wanted to marry.  Her parents wanted to decide for her.

Chris: Yeah, and the soldier wasn’t very respectful of the witch.  I mean, she was just an old lady, but because she was ugly, he called her a witch.  And she made him rich, but he still wouldn’t give her back her tinderbox.

I ended the discussion (which could have gone on and on!) with reminding the kids that what they were doing was feeling their strategies at work.  I said, “You see, you own these strategies.  They are yours.  It’s like you have powers – thinking powers – that can help you understand what you are reading. It was so easy for you to do it with a story that’s not hard to comprehend, but they will work just as well when you are reading on your own in your chapter books.”

I felt this lesson had a strong impact on the struggling readers in the group, and yet everyone in the class enjoyed the telling of “Tinderbox” and later “Tailypo.” How visible are you making those comprehension strategies for kids?  Are you giving kids time to really feel how the strategies can work for them? 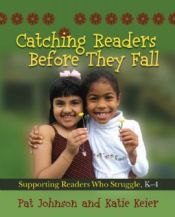