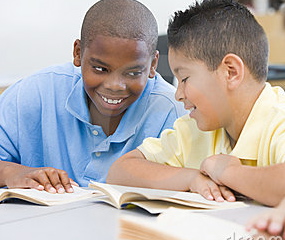 We’ve been working on story structures with the upper elementary students recently.  Of course, there are many helpful graphics to use on this topic.  We’ve been using one story structure graphic that begins with students identifying the rising action, moving to the climax/turning point, and then the falling action and solution.  We modeled a few and did some together as shared demonstrations. Before beginning this work, the classroom teacher and I thought that the hardest part would be identifying the climax.  But what we found was that the students had the most problems with the rising action.  They had a hard time picking out what would be the important information and what would be a detail.  So we planned a lesson on that concept.

I read aloud the Tomie DePaola story “The Mysterious Giant of Barletta.”  The students enjoyed the story of the giant statue that comes alive to cleverly save a town from destruction by an advancing army.  The students were able to discuss the problem and solution quite easily, but before they filled out the graphic we wanted to scaffold their thinking about the rising action.  We listed 15 statements on the Smartboard in random order:

Every night Zia Concetta looks out her window at the statue.

There is a mysterious statue in the middle of town that no one knows how it got there.

The old woman and the mysterious giant hatch a plan.

Sometimes the boys sit at the giant’s feet and watch girls go by.

The people of Barletta love their statue in the middle of town.

The statue came alive and got down off his pedestal.

The people heard that an army was destroying all the towns along the coast.

The town had no generals, captains, or soldiers.

The giant statue loved when all was peaceful and calm and birds came and sat on him.

The people of the town would ask for good luck from the statue as they made their way to market.

Screams and shouts echoed off the buildings.

The people were scared.

Everyone was getting ready to run from Barletta.

Together we discussed and starred the important ones and crossed out ones we agreed were small details.  We encouraged the students to combine some if they thought it appropriate and to rearrange the order of the statements to fit the rising action’s correct sequence.  (This was amazingly easy to do with the Smartboard as lines of text can be manipulated so quickly – every classroom needs one!)

When the students went off to fill in their graphic, they were able to use the discussion and the shared activity to support their thinking.  We’ll be looking for which students might need more “do it together” time in small group to further support their understanding of how to pick out important parts.